In every discipline you have a quirky off the beaten path craftsmen that makes you learning about that discipline worth wile. Perfumery is no difference; it has its bad boys (Eccentric Molecules); it’s sacred cows (Chanel); it’s poets (Hermes) and it’s baddasses; like Le Labo.

“Our scents are extremely qualitative compositions created by some of the best perfumers in the world. The dosage of each scent is an integral part of the perfume’s identity. “

Le Labo produces a handful of scents mad by some of the world’s most renowned Noses (master perfumers), some, unique to each city where they have a location; handcrafted and made of natural ingredients. Le Labo hides true mastery and experience behind it’s attitudinal veneer. 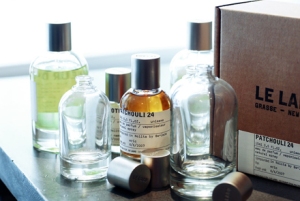 With them, it’s all about what inside the bottle; which may seem obvious but perfumery is a discipline where much more time, effort and money goes into the actual bottle design not the stuff inside. This right here let’s you know the elixir hidden inside these lab-sample styled bottles is going to be great—Like a 3 star Michelin chef at a barbecue shack.

This is the quintessential “when-in-doubt” type of things, like Sauvignon Blanc or Italian food; I’m talking about Le Labo’s “Fleur d’Oranger 27” and I will let them describe it:

A natural and extremely rare Orange Blossom that took over 3 years to compose. Its innate nobility is enhanced by fresh floral and lemony notes, rounded out by musk and the succulent, sunny touches of bergamot, petit grain and lemon. This Orange Blossom has an intensity and delicious ambiguity that gives women – and men – the absolute power of sensuality

This perfume was created for Le Labo by Françoise Caron who has made a handful of other very famous perfumes for houses like Aqua di Parma, Ungaor, Kenzo, and Comme de Garçons.

This stuff is sexy, with a capital “X”- not as round and ethereal as the Aqua di Sicilia; Fleur d’Orange delivers a wafy lightness and dearth that is addictive. I take it back- wear it anywhere you want! Oh, and they put your name on the bottle label! (buy here) 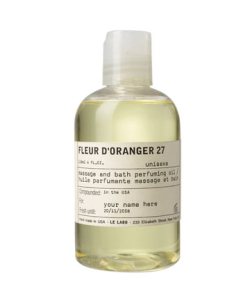 The bright sun has only recently arrived in the Adriatic Coast—months of putrid, cloudy and rainy cold has given way to a piquant sun that makes it quite evident why Montenegro’s coast has become the stuff of legends lately and an up-and-coming destination for the jet set  (don’t hold your breath on the food or awkward Slavic-hospitlaity however).

But as soon as I saw the first warm day and bright sun I though about a cologne I had smelled once upon a time on a trip to Milan. I was sitting in a Café, having a gin and tonic in the heat of summer when a young woman asked me if she could borrow my ashtray, as she came in to whisk it away I caught a very faint whiff of an aroma that reminded me of the bright orange orchards I smelled in my youth growing up in South Florida.

The smell was sweet but fresh and made me close me eyes for a moment while a very faint woody aroma perked me out of my trance to ask her what perfume she was wearing. She laughed “…Oh it’s not mine, it’s some guy’s I met last night…” she said with a matter-of-fact chuckle and then turned back to her girlfriends on the adjacent table. I was stunned.

Back in New York I popped into a department store on a mission to find this perfume. I found the perfume lady and all I had to say was “magical mandarin, oranges and…” but before I could finish she pulled out a flacon of Santa Maria Novella “Aqua di Sicilia.”

Santa Maria Novella has a great story that a romantic like me adores;

Established by the Dominican Fathers shortly after 1221, Farmaceutica di Santa Maria Novella is one of the oldes pharmacies in the world. Starting out with cultivating and growing herbs which they needed to prepare medications, balms and creams for the monastery’s little infirmary. In 1612 when their products gained renowny even in foreign countries, it was decided that the pharmacy should be opened to the public. In the 18th century, thanks to the efficacy of the many formulas used, the fame of the pharmacy spread as far as Russia, the Indies and distant China. Subsequent to the Italian government’s confiscation of church property, in 1866 the activity passed into the hands of the state, which rented it out to Cesare Augusto Sefani, nephew of the last Dominican director of the Officina. Stefani aquired the name and the property, and since then four generations of the same family have owned and managed the Officina Farmaceutica. Presently under the direction of Eugenio Alphandery, the tradition is being carried on with unaltered success. Production is limited and is meticulously controlled. Only the highest quality natural ingrediens are used, and the procedures continue the founding father’s tradition. Every product of the Officina has a story to tell.

but it’s the smell of sweet sun-drenched mandarins, orange blossom, a hint of lemon, spice and cypress that wooed me over. The price is steep, but worth it. (Buy it here)

Recommended Uses: Everywhere, all the time, even in bed. 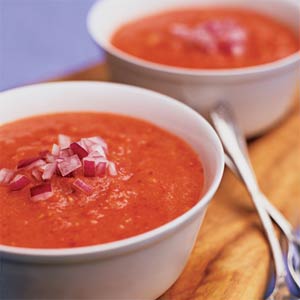 There’s soup, there’s cold soup and then there’s Gazpacho; a traditional tomato-olive oil-bread-based cold soup native to southern Spain. There’s alot of Gazpacho recipes out there but many yield a chunky tomato soup think that’s more akin to salsa than a soup.

Great gazpacho is silky smooth with an unexplained creaminess (unexplained becuase they’re no scream but its coming from the olive oil and bread) with a sippy singiness of vinegar and garlic. It’s great stuff and very easy to make.

Hot summer day= Gazpacho. Serve it with some cold Charbay Lemon Vodka on ice with a splash of soda and you’re set.

Here’s how to make it:

Preheat oven to 350F/185C, line a baking pan or similar with foil paper, drizzle with a bit of oil and put on it the tomatoes, and bell peppers. Throw it in the oven with the rack towards the top third of oven. In 30 minutes trasnfer to tomatoes to a bowl and return the peppers to the oven until the skin is a bit charred then take out as well. Put the peppers and any juices that came off the tomatoe and the pepper into a separate bowl and let it all cool until you can handle it.

Hold the tomatoes over a bowl to catch the juices, peel and cut into peaces. Do the same of the pepper and then add to the soaked and drained bread chunks. Add to it the peeled and chopped cucumber, diced garlic, parsley, salt and pepper. Let it all chill out, covered for about 8 hours, and upto one day in the fridge (or at least until it’s no longer hot).

After its all nice and cold; throw everything into a food processor and add the lemon juice. Puree for a minute until nice it liquifies then and slowly drizzle in the olive oil in a steady stream- at this point it will start to thicken and become slightly pale.

At this point stop! Taste it: you’re looking for a zest of tomatoe and vinegar spiced with the garlic and black pepper- adjust; if too thick add some more vinegar, especially if it needs a bit more acid etc. You can serve it now or throw it back in the fridge to get colder- give it a whirl before you serve it an just serve in a chilled bowl and enjoy.

Recently I was in Paris when my friend insisted on going into the overly Baroque store of Caron near the President’s House on the gilded Rue St. Honore. Once inside I felt like I was in an Alice in Wonderland rendition of Louis XV’s dressing room; baroque, gaudy, bizarre, and full of perfume. I immediately parked myself in front of the men’s colognes and began smelling away; one caught my attention immediately and it was simply called called “Pour Homme Cologne” (for those Franco-challenged it just means “for men”). 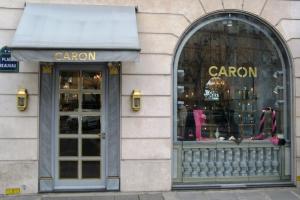 Master perfumer and perfume legend Ernest Daltroff (1867-1941) founded the house of Caron and between 1911-1939 created a handful of scents which are part of the annals of perfume history; a venerable hall of fame you can smell. In 1934 Monsieru Daltroff concocted my new favorite: “Pour un homme”

Caron’s website claims that this thoroughly masculine scent is laden with amber, musk, tonka beans (black kidney-bean shaped little, well beans, that smell like vanilla and sweet hay), lavender etc. I tried and smelled this perfume on my hand and on a smell-strip and it reminded me of only one thing (and it’s why I loved it): a gin and tonic. They describe it as “floral” I disagree, unless what they put in the bottle at the store was different; but, after all, who doesn’t like the smell of gin and tonic (those who like neither gin or tonic ignore).

The fantastic Basenotes website (www.basenotes.net) breaks it down for us identifying some of the components as lemon, rosemary, cedar, sage, and moss amongst others. It’s good stuff! 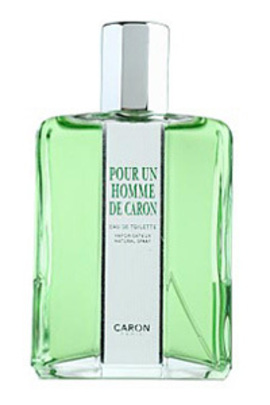 Gin and Tonic you can wear

Recommended uses: vacation, cocktail time and happy hours. A picnic or a summer BBQ with the  pool nearby.

Summer is, well, almost here. Summer, named after the old Norse God Sumar, is not merely a season, but an opportunity for other than the obvious (re: barbecues, beaches, pool, scantily-clad women, and guys if that’s your digs) is a change from the ordinary, from the usual, from the monotony of the ubiquity of the days preceding it. Ritual makes the ordinanry divine and small, often meaningless, symbolic gesture from, in this case, one season to another helsp to ward off apoptosis, in toher ways, it’s a restart button. The same way a haircut is ,or shaving after a few days, or new Years for that matte.r It is a feeling and an act of renewal .

Miami has a temperate two-season year “Hot and Humid as Hell” (May-September) and “Hot and Mild” (October-April) with a very wet summer. But nevertheless, on what may seem as grotesque affectation, every October or so I would pack up all my “summer clothes” fold the linen pants, shelve the white shoes, and pack it all up, label it summer, and not open it again until the following May. Was this absolutely necessary? No, not really. But it did help create a habit and eventually a ritual, which made me look forward the passing of time and aware of the evolution of each year. Every year I opened my box again and you think “Oh shit! I love this shirt… sweet; oh and this, I forgot I had this!”

Seems lame, I know, but try it.

So yes, put all that shit away; take all the flannel, dark browns, blacks, cashmere sweaters, chunky shoes, dark trainers, velour track suit (if you have one, burn it) put them in a box and put them away. Venture out for summer; try it the Italian way; shades of pastel normally left for Easter eggs splashed on everything from pants to sweaters and belts and claim to the world; the sun is out, its summer and I’m not afraid to celebrate it. Of course, say this in your head.

The Gentlemen’s Guide presents a five-part series on things to celebrate this summer; from drinks, to books, looks, food and life 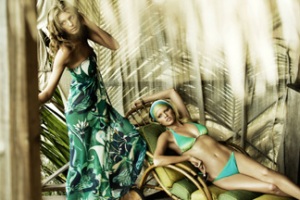 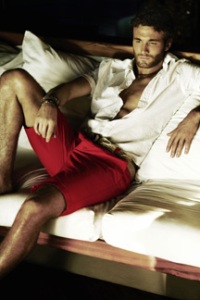